TumblrFlickrYouTubePinterestLinkedinInstagramTwitterFacebook
My View On
Reservation 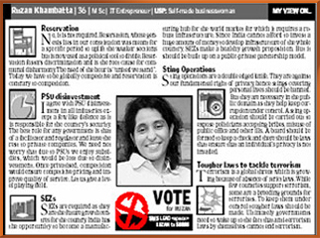 Iagree with PSU disinvestment in all industries except a few like defence as it is responsible for the country’s security. The best role for any government is that of a facilitator and regulator and leave the rest to private companies. We need not worry that due to PSUs we enjoy subsidies, which would be lost due to disinvestment. Once privatised, competition would ensure competitive pricing and improve quality of service. Let us give a level playing field.

SEZs are required as they are the future growth centres for the country. India has the opportunity to become a manufacturing hub for the world market for which it requires a robust infrastructure. Since India cannot afford to invest a huge amount of money to develop infrastructure of the whole country, SEZs make a healthy growth proposition. But it should be built up on a public-private partnership model.

Sting operations are a double edged knife. They are against our fundamental right of privacy, hence stings covering personal lives should be banned. But they are necessary in the public domain as they help keep corruption under control. A sting operation should be carried out to expose politicians accepting bribes, misuse of public office and other ills. A board should be formed to keep a check and there should be laws that ensure that an individual’s privacy is not invaded.

Terrorism is a global threat which is growing because of absence of strict laws. While few countries support terrorism, some are a breeding grounds for terrorists. To keep them under control tougher laws should be made. Ultimately governments need to wake up to the fact that anti-terrorism laws by themselves cannot end terrorism.